How hand hygiene can save lives 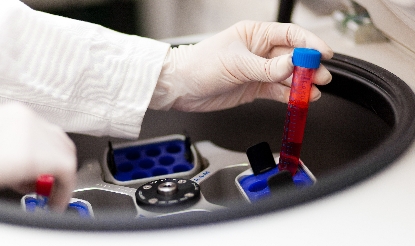 It seems an obvious question, but how does a centrifuge actually work? Of course, you could just say: ‘it goes round’, but there is far more to it than that. There are a number of key considerations to take into account before one can really say they understand the principles of centrifugation.

The basic use of a centrifuge

Centrifugation is just one of the techniques that scientists can use to separate mixtures. Other techniques include (but are not limited to) evaporation, filtration, magnetism and chromatography.

In its simplest terms, a centrifuge is a mechanical device designed to separate particles from a solution by way of centrifugation. Centrifugation involves subjecting a sample to Relative Centrifugal Force (RCF). The success of the separation will depend on the size, shape, density, viscosity of the medium and the rotor speed.

If a solution has some particles that are a higher density than others, then the lighter particles will separate from the heavier ones. The user will see the heavier substances forced to the bottom of the container (tube, bottle, bag etc) and the lighter ones will remain suspended at the top.

If there is no difference in the density of the particles (known as isopycnic conditions), then the sample will not separate.

A key factor to understanding centrifugation is to appreciate how Relative Centrifugal Force (RCF) works. RCF (also known as g force) is the amount of force exerted on a sample when being spun at high speeds. RCF can be calculated using the following formula:

Calculating the radius of your rotor can be tricky, especially when using a fixed angle rotor. It is important to make sure that you measure from centre of the rotor nut to the bottom of the inside of the tube, not the bottom or edge of the rotor. In a standard swing-out rotor arrangement, one will measure in a straight line, but in a fixed angle rotor, it is a bit more complicated because it is not a simple straight line measurement.

It is important to remember that you are trying to measure to the bottom of the sample. Depending on how accurate you want to be, you will need to measure inside the tube, right the way to the base. By measuring to the exterior base of the tube or the bucket, you will increase your radius by a few millimetres and possible get an inaccurate RCF reading.

Using a digital Vernier Caliper such as one supplied by RS will greatly ease the process of measuring. Furthermore, our handy online RCF calculator will do the hard work for you when doing your calculations.

Just like liquid substances have different boiling points, they also have different separating points. Some mixtures only require a low g force to separate, but others need to be spun at very high speeds, say 80,000xg, in order for it to separate. For this, an ultracentrifuge is required. This is where the rotor is spun inside a vacuumed chamber. Since there is no air resistance, the rotor can spin much faster. Ultracentrifuges are usually only used for very specific purposes and they are extremely expensive to buy and maintain. Companies such as Thermo and Beckman Coulter manufacture ultracentrifuges.

However, most substances will separate at such lower speeds. For example, a pathologist might spin a tube of whole blood at around 5,000xg to separate the red blood cells, known as erythocytes and the plasma. It is the plasma that the pathologist will use to perform certain clinical chemistry tests to help diagnose health disorders or conditions.

Having a basic understanding of centrifugation before carrying out laboratory work is vital. Henderson Biomedical is able to train users onsite, giving them all the necessary information needed in order to use centrifuges in the most effective way. This is particularly useful for students who are not familiar with centrifuges or who have never worked in a laboratory before.

Whatever your centrifuge training needs, Henderson Biomedical can help. Feel free to contact our friendly team on 020 8663 4610 to discuss your requirements.